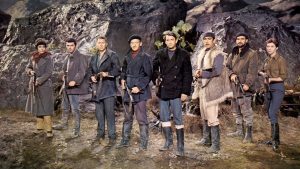 I was first introduced to Gregory Peck at 6 years old when watching The Guns of Navarone on TV. I was first getting interested in acting then, and Peck’s magnificent films (Gentleman’s Agreement, Twelve O’Clock High, Roman Holiday etc.) were an inspiration. But the greatest memory was when I was 9 and I saw To Kill a Mockingbird on TV. That still is one of the greatest film performances I’ve ever seen. The realism of that character just showed me so much about great acting, and by the time we reached the “All Men Are Created Equal” speech I was hooked. A brilliant and inspirational actor, up there with Pacino, Nicholson and Denzel Washington.